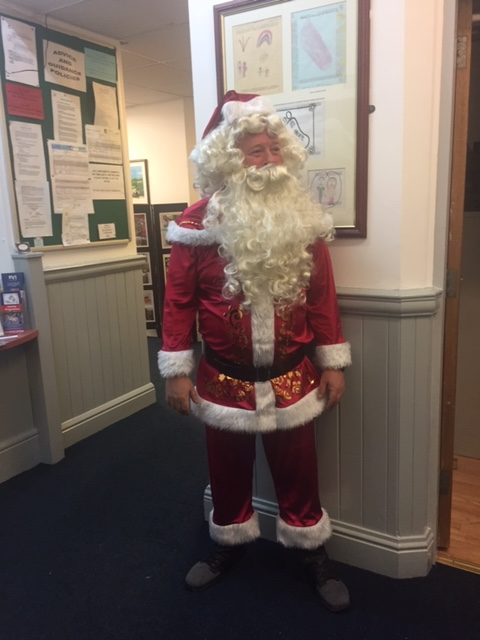 It was a cold November night thank goodness the rain had stopped, the stars were twinkling brightly when who could be heard in the distance riding through the streets of Claremont but Rudolf and one of his friends called Prancer.  They had stopped working at Santa Land and decided to go out for some exercise and picked Claremont’s Egerton Square as their destination.  Who would have believed it the children shouted for their parents to bring them out in the streets to see this apparition.  They had heard that there was going to be a Xmas Tree Switch on event and wanted to see what it was all about.  Believe it or not Santa was not too happy at this disobedience and he came huffing and puffing after them.

All of a sudden the streets around the area were thronging with children, parents, Westminster Academy Primary School Choir, a small fun fair, and the reindeers who had decided to go into their pens and wait for the kids to come and feed them some reindeer food.  Everyone was very excited and Cllrs Ivan Taylor and Lynn Williams were waiting expectantly to switch on the very tall Xmas Tree.  Of course all these events don’t come free and thankfully The People’s Health Trust have sponsored the event with a very kind donation from

A little birdie has said that Claremont First Step Community Centre working in conjunction with Claremont Ten organised for all this excitement to happen and all the children went home with the best of happy memories of a fantastic night and counting the days until Father Xmas comes to their homes.

Claremont First Step Community Centre provides facilities and activities available to all, which contribute to the growth and enhancement of Blackpool.